On the Cutting Edge of Today’s Shopping Trends 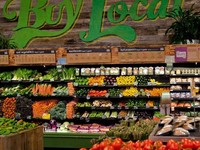 Several of the most important trends in grocery shopping for 2016 point precisely toward companies like Pear Blossom Farms.

A veteran supermarket analyst named John Karolefski, founder of a website called GroceryStories.com, says the customers ordering food products online “ranks among the top trends in grocery shopping for 2016.” He also mentions product sampling and nutritional tours as ways more companies are luring customers to their stores and markets. Pear Blossom Farms has been participating in both – since before we knew it was a national trend.

"The top trends for 2016 indicate that traditional shopping patterns are changing," says Karolefski. "Look for grocers to get creative and enliven what has been a mundane chore." In fact, the popularity of roadside markets, farmer’s markets, and on-farm stores like ours has been so significant that even national chain stores are trying to get in on it. So major grocers are starting to open smaller stores to cater to the tastes of more discerning customers who have tired of the giant supermarkets with miles of shelf space and acres of concrete floors.

Most grocers already know such customers generally “cruise the perimeter for prepared food, dairy, bakery and produce,” as Karolefski says. He points to several chains opening stores as small as 14,000 square feet to attract shoppers with a strong desire for small, local, home-grown and home-made food products.

A recent report from the Food Marketing Institute explains why. Based on surveys of grocery shoppers, the report found that 72% say they buy locally grown products on a regular basis. When asked why, 82% cited freshness, 75% said they like supporting the local economy, almost 60% said local products simply taste better, and more than a third mentioned the environmental impact of transporting foods across great distances.

So big chain stores are starting to label locally-grown produce, and even put up signs on separate displays. Others are featuring the names of farms they bought certain produce from, and other similar strategies for making a large store appear more like a local general store.

It is easy to understand why national marketing experts are advising the big stores to implement such strategies. But to some extent, such techniques are really trickery. Consumers still know the difference between a giant chain store and a local on-farm store. And they are increasingly searching out websites like this one to find the farmhouse products they remember from years past, and still crave today.

Pear Blossom Farms has continued to experience growth because of this growing trend. Our products are all made from fruits and vegetables grown locally, and made the old fashioned way, based on recipes handed down through the generations. That’s why we talk about a “legacy of good taste.” There is no substitute for the real thing.