Nature’s Wonder – in a Bottle 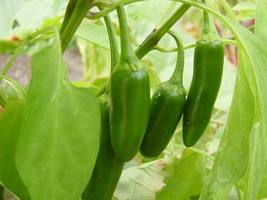 Occasionally someone tasting Dad’s Jalapeño Sauces for the first time will say something like, "Wow - that'll clear your sinuses!"

They may intend that as a joke, but in fact it is one of the most prized properties of capsaicin, the substance that gives chili peppers their “heat.” In fact, there are several very effective capsaicin-based sinus-clearing nasal sprays now on the market – all approved by the FDA. That’s because its medicinal qualities have been known for centuries, and in more recent years scientifically proven. Today, capsaicin is regularly used to treat not only sinus problems, but also headaches, pain, inflammation, gastric problems, and more.

Christopher Columbus actually discovered chili peppers (which are uniquely American native plants), growing in the Caribbean islands. It was he who named their fruits "peppers" (remember, black pepper was the highly prized spice in his time). Chili was the Aztec word for the plants, added a century later by explorers of Mexico. But Columbus’s crew learned right away that they felt better after eating chili peppers, and the ship’s doctor made a good living ever after using chili peppers as medical treatments for a wide variety of ailments. The jalapeño peppers used in Dad’s sauces also have more than 3½ times more Vitamin C than oranges; they are also high in Vitamin A and lots of other good things.

People who cook with chili peppers know that most of the “heat” comes not from the skin or outer flesh, but from the white membranes inside, where the seeds are attached. It turns out that nature has a very good reason for that – the same reason for the burning sensation caused by capsaicin. You see, peppers spread their seeds naturally after being eaten by birds. Birds are immune to capsaicin, but mammals are not. That’s why pepper seeds are often mixed in with bird seed to discourage squirrels, rats, and other animals. It’s also why pepper spray is among the most effective defenses against bad guys, and why it is often used to rid gardens of skunks, raccoons, and other pests. So the fact that peppers are “hot” is nature’s original way of making sure there will always be more peppers next year.

That is good news for us, and especially for fans of the fresh home-grown Jalapeño Sauces Dad perfected years ago. Whether you “need it” to cure your sinus congestion and sinus headaches, or just love the burst of flavor, Dad’s is now available in five popular flavors: red, green, peach, barbecue, and chipotle. What a great gift of nature – giving us happiness and health at the same time!